How to grow mushrooms at home

Mushrooms can be grown at home, regardless of the weather and humidity. So if you have a good place to grow in your home, it is better to take action now to increase your income.

Especially because of the small production environment, the obtained mushrooms are of better quality; Mushrooms can be sold at a higher price than supermarkets.

The best time to grow mushrooms at home is between October and December, but if there are facilities for air conditioning and balancing the temperature of the growing area, mushroom cultivation can be generalized in other months of the year.

In general, the mushroom cultivation method is specific to it and it can be grown in a dark environment and can tolerate any amount of light except direct sunlight. In any case, in addition to the good ventilation in the mushroom breeding place, the temperature of the breeding environment should be maintained between 15-10 degrees. In addition, the breeding area should be completely clean, washable and seamless or a breeding ground for harmful bacteria, insects and fungi.

To grow mushrooms at home, first select the type of mushroom you want to grow.

Growing oysters, white buttons and shiitake at home is very easy. The planting method of all three types of mushrooms is the same, but they have different planting media.

Oyster fungi grow best in straw and coffee grounds, shiitake mushrooms, in dry tree straws and button mushrooms, in compost fertilizers. In fact, different culture media show the different nutritional needs of each fungus. Of course, all three types of mushrooms can be easily planted in a bed of straw or straw, if you use straw, make sure it is healthy wood.

Grow a species of mushroom for your own test and evaluation as a mushroom grower at home. You need to cultivate it the way you want to eat it.

The best time to plant mushrooms at home is between October and December, but if there are facilities for air conditioning and balancing the temperature of the growing area, mushrooms can be grown in other months of the year. Mushroom cultivation has its own conditions and the fungus can be grown in a dark environment and can tolerate any amount of light except direct sunlight.

And as for the right place to grow mushrooms, you need a hall that varies in size depending on the amount of mushroom production. But on average, a 40-meter hall is needed to grow five tons of mushrooms. In mushroom cultivation, hall insulation should be done to prevent heat and cold loss, shelving and preparation and installation of equipment should be done.

In addition, ventilation in the culture medium should be uniform and should not be given too much air on the surface of the culture and ventilation should be evenly distributed throughout the room. When producing mushrooms, the room environment also needs sufficient humidity and the average best humidity for planting mushrooms is between 70 and 80%.

The air conditioning should be well done, the temperature of the mushroom growing environment should be maintained between 10 and 15 degrees. The breeding area should also be thoroughly clean, washable and free of seams or breeding grounds for harmful bacteria, insects and fungi. 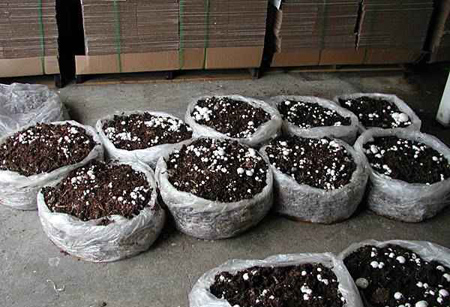 Space required to set up a 5-ton hall:

The minimum space required for 5 tons of compost (in a mushroom growing house at home), so that the amount of mushrooms obtained can compensate for the costs, depending on the time, the amount of 1 ton to 1.2 tons of mushrooms can be He picked it up.

5 meters wide and at least 8 meters long and 3 meters high is enough for 5 tons of compost, and the more these dimensions, the more the field for production will be, but dimensions less than this amount may not be economically justified.

For this hall, we should have a small room with dimensions of 2 * 2 or 2.5 * 2.5. This chamber is for the purpose of cooling the air in this place with an air conditioner and then entering the hall, or heating the air with a heater and then sending it to the hall, or using this chamber as a small warehouse during harvest times.

Shelving For these dimensions of the hall 5 * 8, two rows of shelves with a width of 140 cm in length of 7 meters with 3 floors can be considered. The distance between the floors is usually 65-70 cm. Shelving is better to choose from galvanized pipes and be closed with galvanized wire.

If the sound of the humidifier is not important, we can use small humidifiers that no longer need air conditioning and cooling, and these humidifiers both cool the air and provide humidity.

Air conditioning ducts It is better to use plastic ducts with a width of 50 cm, otherwise you can create air ducts with polyethylene plastics so that the first hole is drilled at the entrance of the air conditioner to the hall and the next holes. Strike at a distance of 50 cm with a diameter of 5 cm.

Preparation of compost or plant fertilizer:

The most important and the first principle that should be known for growing and cultivating mushrooms is the bed on which the fungus grows and feeds, which is called compost. Fertilizers are generally called compost. 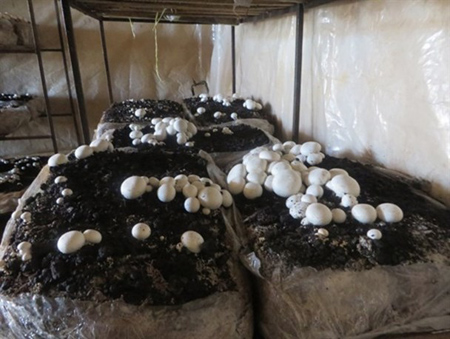 Mushroom seeds are different seeds from other plants. In fact, what are called mushroom seeds are cooked wheat grains. When the fungus matures, the blades on the back of its cap open and spread in the air between the blades. These fins are known as spores, which are not visible to the naked eye.

These spores need food to survive, so they cook the wheat to soften it so that the fungal spores can feed on them, and another use of cooking wheat is that the so-called wheat becomes sterile and no longer germinates. In this way, all its nutrients remain for the spores and are not spent on the growth of wheat germ.

After the fungus has grown enough and the crown has reached its full shape, the ripe mushrooms must be harvested. In harvesting, it should be noted that fungi that have cracked and opened the umbrella lose their marketing value. Also, these mushrooms have lost weight and mushrooms that are picked prematurely are light in weight and are considered second-class mushrooms and have less nutritional value.

Large baskets should not be used for harvesting when harvesting. Because the pressure of the mushrooms on each other in the basket causes the mushrooms under the scratch to be scratched and blackened. To harvest the mushroom, you have to hold the cap and give it a screw to separate the base from the ground, and immediately cut the dirty and infected stem with a sharp knife and put the clean mushroom in the basket. And it is better to collect with gloves. Mushrooms are harvested every fifteen days and this program lasts for two to three months.

Growing mushrooms at home is fraught with problems. For example, the entire culture medium may become infected with mycogenes or spider webs and destroy the crop altogether.

Ventilation in the culture room environment should be done evenly and the surface of the culture should not be given too much air and ventilation should be uniform in all parts of the room.

If the temperature of the culture medium reaches less than 14 degrees and the ambient temperature of the room reaches about 7.5 degrees, the area around the substrate should be covered with a thick cloth to prevent heat exchange to the environment. For the growth rate of the fungus, the ambient temperature can be raised to 14.5 degrees and the ventilation rate can be increased, but care must be taken not to move the air towards the surface of the fungus.

To reduce the amount of humidity, it is necessary to install hygrometers in different parts of the room and to visit them regularly. If due to the drying of the soil on the bed surface, irrigation is needed; You should spray the soil surface with a sprayer so that water does not flow on the surface of the bed or collect in one place. Irrigate with pure water at a temperature of 32 degrees and very carefully.

A few weeks after coating the substrate surface, fungal mycelium fills the entire substrate surface, and on average 7-8 weeks after spoon implantation, small pinhead fungi appear all over the culture surface. At this time, the temperature of the bed should be between 10-14 degrees, but the more the fungus grows, the temperature can be increased from 14 to 16.5 and the amount of ventilation can be increased, but care must be taken that the direction of air movement, Do not face the surface of the fungus.

After the mushrooms have grown and are close to harvest, liquid fertilizer can be sprayed on the surface of the bed, but care must be taken not to spray on the mushroom cap. This action is very effective in increasing the yield.

Mushrooms that have cracked and opened their umbrellas are not worth marketing. In addition, it loses weight and also mushrooms that are picked early are light in weight and are considered second-class mushrooms and have less nutritional value.

Large baskets should not be used for this purpose when collecting. Because the fungal pressure on the basket causes the underlying fungus to be scratched and blackened. To collect the fungus, it is enough to hold the cap and give it a screw to separate the base from the ground and immediately remove the dirty and infected stem with a knife. Sharp cut. Put clean mushrooms in the basket and collect them with gloves if possible. Operation is done every 15 days and this program lasts for two to three months.

Transfer the picked mushrooms to a cool room and grade them as soon as possible. Remove the stained, incomplete, and crooked mushrooms and send them for mushroom and ketchup powder preparation. Market healthy products in first and second class packages.

Tips and warnings for growing mushrooms:

If you are really interested in growing mushrooms at home; Visit reputable specialized sites; And consult with people who have experience in this field.

12 ways to make money from bitcoin

Thu Nov 19 , 2020
12 ways to make money from bitcoin Making money from bitcoin is one of the methods used today to make a profit with the advancement of technology. As we said in previous Bitcoin articles, Bitcoin is simply a digital currency used in online transactions. In fact, bitcoin was created to […] 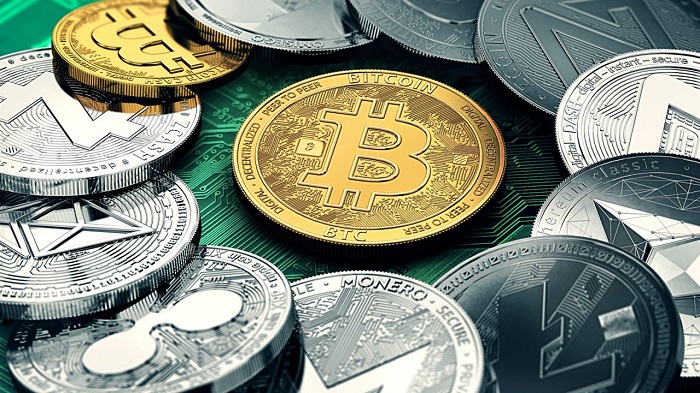